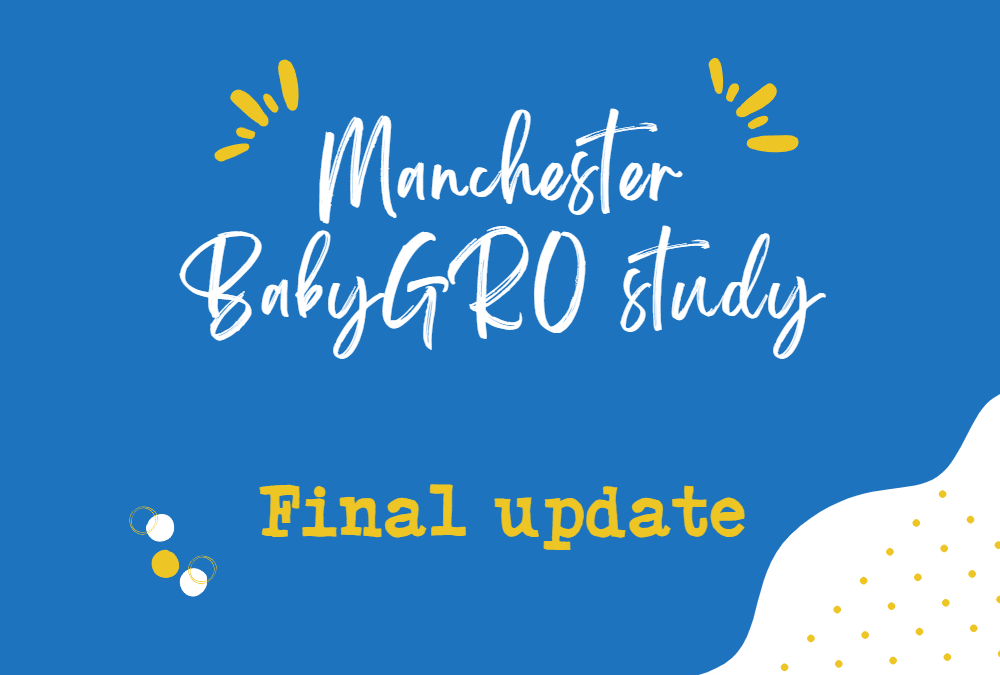 We are pleased to see the final report from the Manchester BabyGRO study which has some important implications for early identification of children born small who may be at risk of developing health problems in later life and who would therefore benefit from closer follow-up. We hope that the findings from this research will have a positive impact for many families.

Intrauterine growth restriction (IUGR) is a condition where growth slows down during pregnancy. This happens in about 3 in every 100 pregnancies and can result in babies being born very small, who are then seen by Paediatricians to check their growth and general health. However, other babies are born small but not severe enough to be called IUGR. They would not see a doctor, but they may be at risk of later health problems.  The Manchester BabyGRO Study has focussed on both groups of babies.

There are specific risk factors that we focus on to try and reduce risks of later life illness such as diabetes, heart disease and stroke. As an example, IUGR is related to higher blood pressure; for each 1kg lower birthweight, blood pressure is higher by 1.7mmHg in adolescence. Putting this into context, in adulthood, a lowering of blood pressure by 2mmHg is associated with an 8% reduction in stroke risk.

Identifying individuals at greater risk and stepping in early may be key to starting these children on the right path towards a healthy adult life.

The Manchester BabyGRO Study examined which factors in pregnancy impact on risks of later-life illness that begin to present in childhood.

The important questions that we addressed were:

The study had two arms:

Findings from the study

Thanks to all the willing participants and their families, we met all our recruitment targets for the study. We have now completed analyses of the data and we have made links that may help early identification of children who might benefit from closer follow-up.

We recruited 80 mother and baby pairs for this arm of the study. All women were identified as being at risk of delivering a small baby, based on their blood tests during pregnancy. Not only did we look at patterns of weight gain, but we specifically examined measures that indicated adiposity (fat) gain. These included skinfold thicknesses (a measure of fat underneath the skin) and body mass index (BMI).

By studying patterns of growth in these babies in relation to their growth patterns before birth, we have made interesting links between the two. Those babies who had the severest growth restriction whilst in the womb, put on the greatest skinfold thicknesses between birth and six months. Their gain in BMI was the greatest, showing the potential helpfulness of introducing these measurements in the first few months of life.

81 children attended the Clinical Research Facility for measurements, which helped us to assess later-life disease risk. These included height, weight, abdominal, arm and thigh circumferences and skinfold thicknesses.  Children particularly enjoyed going in the BODPOD (Cosmed, USA), a specialised piece of equipment that let us accurately measure fat percentage in the body. We measured blood pressure and the rate at which blood flows through vessels.

We have studied these data carefully, and have made links between particular childhood measurements, and growth rates of these children before they were born. These growth rates are, in turn, linked to specific measurements of how much blood is getting to the placenta, the organ which supplies the unborn baby with oxygen and nutrients.

A main finding was that of a potential triad of associations between growth rates before birth, rates after birth and blood pressure in childhood. Therefore, our evidence supports that those babies who go on to develop blood pressures towards the higher end of the normal range in childhood could be identified in very early life.

Half of the children attending for measurements also agreed to a fasted blood test. Therefore, we have measured levels of fat and sugar in the blood, as well as gene activity levels (“transcriptomics”) and the end points of processes that these genes govern (“metabolomics”). In combination, these have led us to identify a key pathway involved in the development of higher blood pressure in children; the arginine-nitric oxide pathway.

This could be the key to understanding how we can identify, follow up, and prevent the onset of diseases such as diabetes, heart disease and stroke in later life.