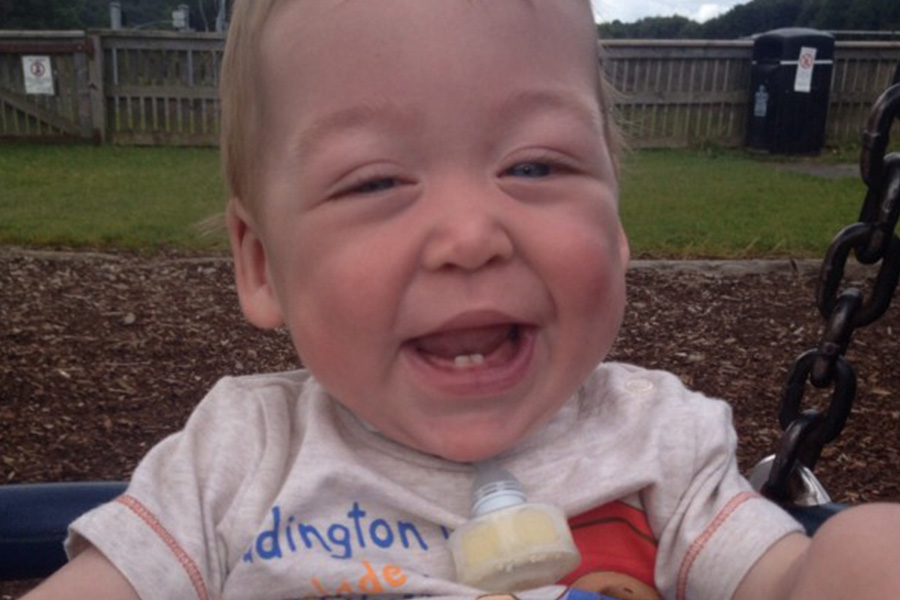 Robert is an undiagnosed child. Multiple Pituitary Hormone Deficiency has been identified as a part of his condition and treatment is able to be given for this. Here his Mum tells us about Robert’s first year.

I had a problem free pregnancy and at 35 weeks I was stood talking to a colleague when I realised my waters had broken (like something from a comedy film) and I should possibly go and be checked out at the local hospital.

That night our beautiful boy was born and despite arriving safely he stopped breathing and had to be whisked off to the Special Care Baby Unit.

Once I was sorted out and on the postnatal ward I sat there for hours with a little instant picture of Robert, on my drip, being brought cups of tea and toast. I kept asking to go and see him. I kept being told that a doctor wanted to come and speak to us. I was totally naive at this point,oblivious to the fact this could mean something bad. I also remember being elated to get my own room, but with hindsight this was probably also not a good sign.

A Neonatal Consultant and the nurse looking after Robert that day came to speak to us, as soon as they arrived I realised the game had changed. We were told Robert had deteriorated and was needing a lot more support from the ventilator. He was also floppy, they suspected a brain injury and were cooling him to prevent it getting worse. He looked a bit unusual and they thought he probably had some sort of syndrome. The future for him was uncertain, he might have profound disabilities or he might be relatively “normal”. Nobody could say and it would be a long road before we got any answers.

The consultant delivered the news so clearly and so well but I think my heart broke into a million pieces during that conversation. The fact that Robert was going to face a lot of challenges did not really sink in, I just wanted to know if he was going to live. There was no worries about that.

I wiped my tears and realised I needed to see Robert. A kind healthcare assistant got me sorted and wheeled me down whilst my husband called our families to update them.

I saw Robert lying in his little babytherm cot so small and helpless and cold and I loved him more than anything in the world.

In the next few days instead of the predicted improvement everything got worse and I was scared at one point as the doctors seemed to really be scratching their heads. The plan of getting him off the ventilator was not working, he needed to be switched to the oscillator as he was struggling so much. His blood pressure was very low, and it would only remain stable with cortisol. Robert was tested for various conditions, some horrifying, none with a great outlook, and these tests had all come back negative. A blood test showed his T3 (thyroid levels) were rock bottom which is when a pituitary issue was first suggested. I didn’t know anything about pituitary glands apart from it was something to do with puberty from year nine science. We had a lot to learn.

A doctor who is now Robert’s Endocrine consultant came into the Intensive Care area one day. I stood there baffled as she said she thought Robert had an issue with his pituitary gland, and if medications were given he would be able to breathe without the ventilator. I must say I was a bit dubious but a few days later he was back on a normal ventilator, instead of the oscillating one, and then one day when I went in I was told he had pulled out the ventilator tube whilst the doctors were trying to get blood. When he was nine days old I was finally able to hold him for the first time.

In the next few weeks the massive improvement we had been expecting didn’t come. He was still working hard to breathe and tube feeding was a nightmare. At this point his endocrine issues were stable apart from the fact he kept becoming hypoglycaemic so it was decided he should start on Human Growth Hormone and this seemed to do the trick with stopping his hypoglycaemic episodes. It was hard to inject such a tiny, skinny baby but it has quickly become part of our routine.

After 8 weeks in SCBU Robert was transferred to the respiratory ward in the Great North Children’s Hospital. This was excellent preparation for coming home and we started to feel like he was truly our baby as we were fully responsible for him.

He got home just before Christmas 2014 after 81 days in hospital but that wasn’t to be our happy ending. At this point he had a nasal pharyngeal airway (a tube we had been taught to put down his nose), as it had been discovered his upper airway was floppy. This was a nightmare to look after at home and to be honest he was still quite poorly. He was readmitted in the January and it became apparent a tracheostomy was the best option for him. We were horrified at the prospect but it has been the best thing for him being able to breathe well he was finally so happy.

He has been through another op, a Nissen’s fundoplication to stop him vomiting all the time and had a mickey button (a feeding tube into his stomach), which again whilst very worrying has helped him enormously. Not constantly being sick means he has gained weight and his development has come on in leaps and bounds.

Robert finally was able to have an MRI scan of his head, which showed his pituitary was not formed correctly. Thankfully the rest of his brain looked OK. This confirmed he did have MPHD as the normal chemical tests were not possible due to him presenting so dramatically when he was born.

We have been told to wait and see how Robert will develop, as he is overall an undiagnosed child, with MPHD as part of a wider suspected syndrome. We see him making excellent progress all the time and cannot wait to watch him grow and make more memories together as a family. We are sure as he grows his MPHD will present more issues, and we are thankful to have the CGF support group to consult for reassurance and advice. We are fortunate to receive excellent care for him at the Royal Victoria Infirmary in Newcastle.

As well as the CGF the following groups have been very helpful to me and I would recommend them if your child faces similar issues to Robert.

This is an excellent support group on Facebook for parents with a child with a tracheostomy.

Swan (Syndromes without a name)
http://undiagnosed.org.uk

This group is for families with undiagnosed children. There are also local groups on Facebook who have meet-ups and events.